Women play an important role in fishing-related activities; while more involved in aquaculture, processing and marketing, they also participate in harvesting and direct capture 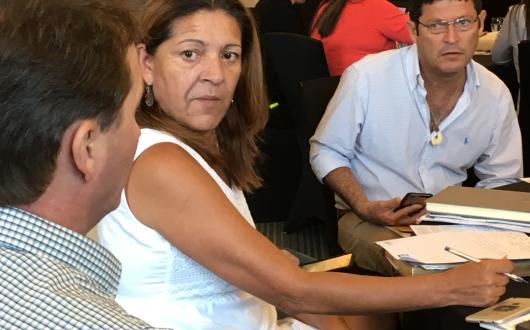 In the fishing sector, a world stamped by the strong presence of men, locating a businesswoman, leader and advocate for the cause is no easy matter.  In Costa Rica, where fishing tourism and sport fishing generate over 60 thousand direct and indirect jobs, one lively and empowered female figure stands out. With more than 28 years of experience in fishing tourism, Jeannette Pérez is truly a woman of the sea, and one of the female faces leading the fight to assure conditions for sustainability in this Central American country.

While her passion and commitment to protection for the sea was born of chance events rather than inherited, today Jeannette Pérez is a brave fisherwoman, innovative businesswoman and leader in this sector. She is also a mother and grandmother, and admits she feels safer navigating a fishing vessel than aboard a plane.  Jeannette is one of the few women in the country who derives her livelihood directly from fishing. She is equally enthusiastic about taking a leading role in the defense of fishery resources, especially those that attract tourists from around the globe to practice sport fishing.

Her bond with the world of fishing goes back to 1989, when she began working with a tourism company involved in sport fishing. A few years later the company closed, and she decided to form her own. “I had to start all over again from scratch, with two kids, no work…and as a head of household. A friend suggested opening my own business and that’s how I got the money to buy my first boat for fishing tourism, which I baptized ‘Sea Lady.’  Some years later I was able to get a second vessel that I called ‘Wild Lady’ and the business has now kept me going over the years,” she says.

That’s how Jeannette discovered her entrepreneurial capacity, her leadership and her dedication to fishing. According to data from ECLAC, only 2% of women in Costa Rica run their own business, so it’s no surprise that making her way in such an environment has been difficult.  “Learning to evolve in that world and find success was one of the greatest challenges I faced trying to integrate myself in the sector,” she asserts.

In Costa Rica, fishing tourism and sport fishing are a service industry that generates around 331 million dollars a year and more than 60 thousand direct and indirect jobs. These include administrative work at hotels, marinas and wharves; cleaning, security and maintenance tasks; and other work that supports the activity, such as supply stores or jobs as crew, captain, deck assistant, vessel mechanic and others. Jeannette’s company contributes to this economy from the vantage of a small business with local workers in the port of Quepos, offering a vision and approach differentiated from international tourist operations.

Globally, strengthening women’s role in the world of fishing continues to be a challenge. Even though Costa Rica is a leader in the defense of gender equality in Latin America, the unequal conditions in fishing that many women still experience impact on income for them and their families and limit opportunities for their development and growth. The United Nations approach to this issue lies in Sustainable Development Goal #5, equality between the genders and empowerment of all women and girls, with instruments such as the FAO Voluntary Guidelines for Securing Small-scale Fisheries. These seek to ensure that women participate in decision-making processes and can access physical and capital resources to develop their own enterprise with the objective of satisfying their needs and aspirations.

For the past year, Jeannette has participated actively in the Platform for Sustainable Large Pelagics Fisheries facilitated by UNDP, pursuing innovative solutions and proposals to improve environmental, economic and social performance in fishing tuna, mahi mahi, swordfish and other species. She has the honor of being the first woman in the country named to the Board of the Costa Rican Fishing and Aquaculture Institute (INCOPESCA, for its name in Spanish).

Like other fishery sectors, in recent years fishing tourism has been impacted by the decline in populations of the large pelagics, like marlin and sailfish, which mostly sustain the industry.  “We’re seeing countries that are offering tourists more advantages and governments that have taken measures to protect resources of interest in fishing tourism, like sailfish and marlin, and this has made Costa Rica less competitive,” explains this woman of the sea.

“Fishing and the sea were always important for Costa Rica, but the crisis in this sector during recent years made me feel I needed to get involved in fishery policy, because many of the decisions being made didn’t integrate our vision or contemplate our needs. So I decided to get involved in different processes to find solutions for our fishers,” she explains.  That’s how four years ago this fisherwoman first sat down with the rest of the INCOPESCA board members as representative of the fishing tourism sector, a position she continues to hold today.

Jeannette Pérez is convinced that the National Platform for Sustainable Large Pelagics Fisheries is the forum Costa Rica needs so that all of the fishing sectors can collaborate on a work plan and set out a path for overcoming the crisis this industry in general is now facing. “We’re stuck and we need to move forward, and this can be the right road. My hope is that we can accomplish this, “she concludes optimistically.

The Platform is led by the Ministry of Agriculture and Livestock as entity governing the fishery sector, along with INCOPESCA, the Ministry of Environment and Energy, enabled by the United Nations Development Program with financial support from the Global Environment Fund, but more important, driven by their participants.

From fishing lines to computer networks

"This is new for me, I never imagined being here in front of the computer, managing a computer program like this and I thank God for that"

Just two years ago, Rafael Acuña was a typical longline fishing captain. His life was spent most of the time at sea, dealing with fishing lines, hooks, storms and long days of work. This was almost his whole life, until for family reasons he had to consider the need to leave the trade and stay on land.

They were moments of uncertainty and search for work options. And even in the best of his dreams he could have imagined the direction that life had for him. By chance, he was summoned to an interview to find the captain who would be in charge of managing the Oceanographic Information System for Fisheries, one of the projects of the Platform of Sustainable Fisheries of Large Pelagic of UNDP.

Rafael was selected for the job and his life changed. His role was to provide all the fishing experience he had accumulated over 30 years to make the system really useful for captains on the high seas.

“This is new for me. I never imagined being here in front of the computer, managing a computer program like this and I thank God for that, “she says with her eyes shining.

“It’s not easy to learn when you’re old. I am making a great effort to give my best. Even the captains who come to ask me for information are surprised that I am in this, “he says.

It took some training sessions with Spanish and French experts and quickly took off. From there everything is trial and error, and a huge desire to discover the potential that technology has available to fishermen.

“Once a” normal life “has been recovered, as it says, with a fixed schedule and lunch, your work hours are spent in front of a monitor with the sole purpose of getting the most out of this experience.

A few months after being involved in the initiative, Rafael already manages the system with great agility. He changed the rudder without problems by a mouse and from his right hand he controls precisely what appears on the screen. Now he offers talks and does a motivation work so that his former colleagues want to join the project and make it grow for the good of all.

The Oceanographic Information System for Fisheries (CATSAT) is a pilot project that is fed with the information that the captains provide of their fishing days and based on climatological, temperature and other similar data allows to identify better fishing areas for the capture of tuna, dorado and swordfish.

“Before leaving port, the captains pass by my office and we check together the best fishing conditions. We have seen good results because in this way fishing becomes more effective, the costs of alist of the boats are reduced and it even benefits the families of fishermen, because they will be able to get to the Port more frequently “, he tells us.